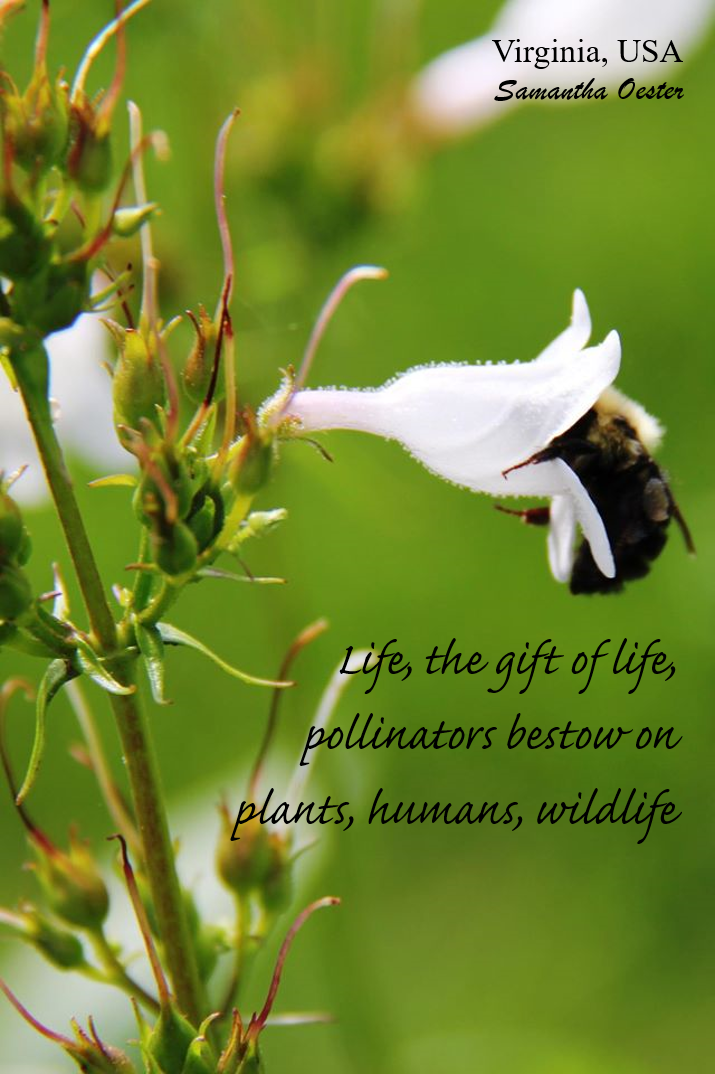 Many flowering plants cannot reproduce without pollen deposited by foraging animal pollinators. Ecosystems, wildlife, and people benefit substantially from the work of these animals. They maintain plant biodiversity, play important parts in food webs, and contribute to oxygen production and carbon sequestration by aiding plant reproduction. Furthermore, pollinators play a key role in regulating many other ecosystem services. About 80-90% of the world’s wild flowering plants are assisted by animal pollinators. In the U.S., animals help pollinate more than 75% of flowering plants, and almost 75% of crops. Some popular crops, like tomatoes, depend completely on insects for pollination. And crops that do not absolutely require animal pollinators to reproduce still benefit from increased quality and yields when pollinators are involved. An estimated one out of every three bites of food we eat exists because of wildlife pollinators like bees, butterflies, moths, birds, bats, beetles, and other insects and mammals. Animal pollinators are directly responsible for an annual market value of $235 billion-$577 billion of global crop production. But according to a 2016 Intergovernmental Science-Policy Platform on Biodiversity and Ecosystem Services (IPBES) report, wild pollinators have declined considerably at local and regional scales in North West Europe and North America. In Latin America, Africa, Asia, and Oceania, local declines have been reported, but data is lacking for general regional status. Pollinators need our help, and we need the fruits of their labor—figuratively and literally. Threats to wildlife pollinators include habitat change, intense agriculture, pesticides, environmental contaminants, invasive species, disease, parasites, and climate change. To participate in pollinator conservation, you can plant a pollinator garden with native vegetation that flower at different times of year to provide nectar and pollen sources through different seasons.  You can also provide nesting sites for local pollinators and avoid pesticide use. For more information on helping pollinators, watch the USDA’s video “Be a Friend to Pollinators.”

Photo and haiku by: Samantha Oester